You have successfully deleted an item.
Campion College 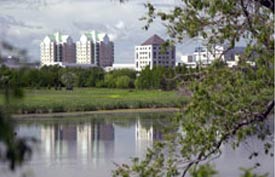 Campion became a junior college of the University of Saskatchewan like Regina College in 1923, later severed that association in favour of one with St Boniface College in Manitoba, and returned to federated college status with the University of Saskatchewan in 1964. It built its facilities on the new Regina Campus in 1968 and subsequently vacated its original high school premises on 23rd Avenue.

Its Regina Campus building was designed in accordance with Minoru Yamasaki's original plan for the campus, with a "podium," contemplated as eventually being joined with the campus-wide ground floor. Thus far this has not occurred and Campion's building remains isolated.
Saskatchewan Universities
Browse All